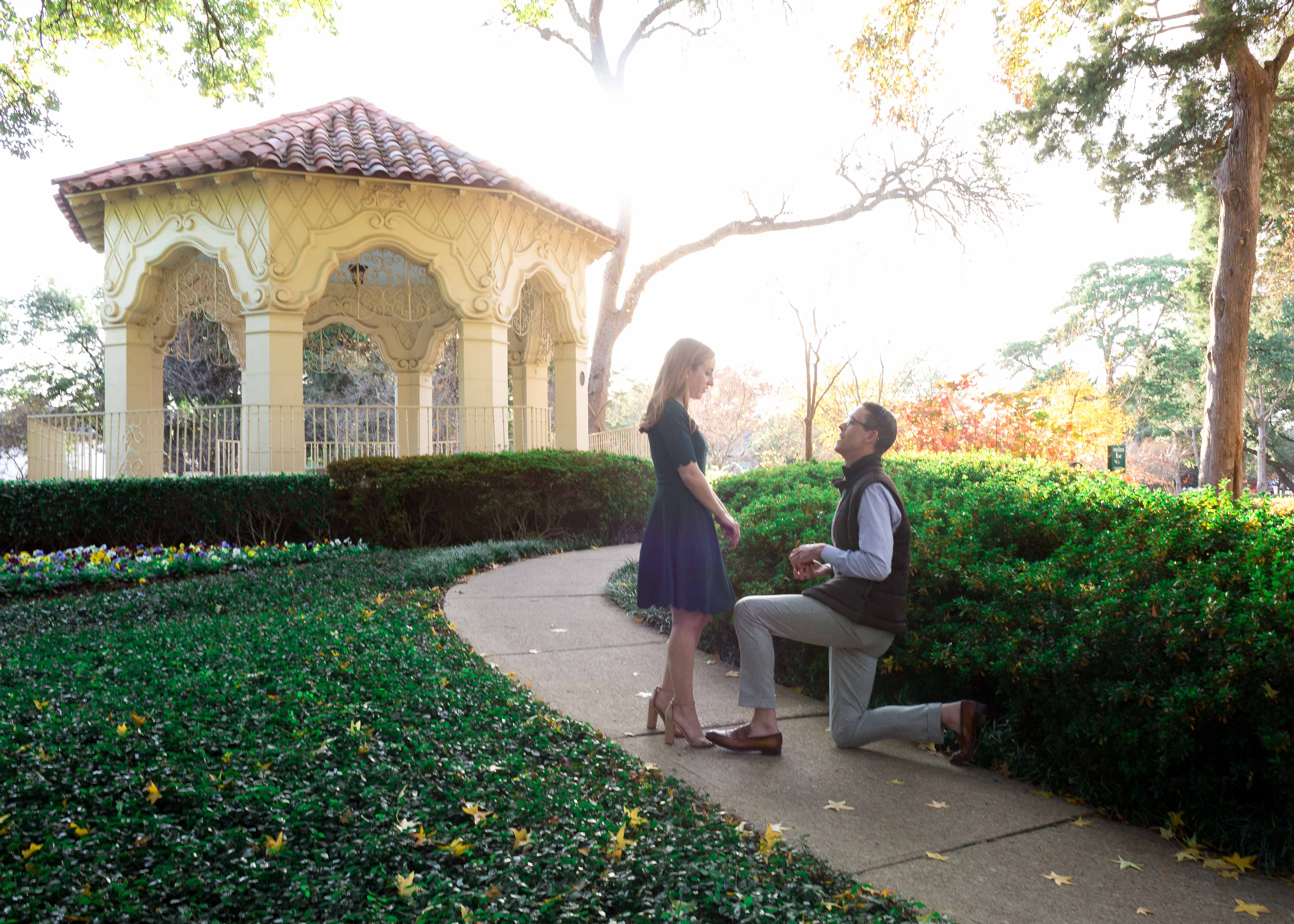 My sweet friends Rachel and Justin are engaged!! Justin messaged me early last week and asked if I would be back in Dallas anytime soon. He said he needed some “special photos” and wanted to have a surprise proposal for Rachel by making her think we were just taking holiday photos.

You see, Rachel is a fashion blogger and has modeled for me so many times before that she would have no idea that this was anything different. Of course, she suspected me at first but I quickly threw her off as I explained that I was in town for another client (a total fib but totally worth it!) and that wanted her to model for me while I was in town just so I could improve my portfolio. I even asked her to “convince” Justin so she wouldn’t think he was in on it and he played it off super cool.

The truth is, Justin planned everything. He wanted the dogs to be there because they are their family and he picked the location. He made some some cute flower leashes for their dogs (his DIY skills are crazy good, y’all!) and he got Christmas bandanas for them to wear. He snuck out earlier that morning to hand them off to me, along with some super cute wood signs to use as props for the dogs. Those wouldn’t come out until after the big moment though.

He chose Flippen Park because it’s a beautiful little park in the middle of Highland Village near downtown Dallas. It has the cutest scenery and is a popular spot for pictures. There was a sweet gazebo surrounded by bushes and a gorgeous fountain in front of it.

Aren’t Reagan and Winston the cutest? They’re flat coated retrievers and Reagan the puppy was a boatload of energy during our session. This was the longest they ever sat still together and thank goodness it worked long enough for me to snap a couple pictures!

Up until this point, Rachel still thinks we are just doing family portraits. As Justin puts the dogs aside for a few minutes, I walk with Rachel to this location that Justin had picked out beforehand. She starts talking with me saying that she had hoped he would propose because this would’ve been a perfect opportunity. She didn’t even think he had a ring yet. Little did she know, this “perfect opportunity” was planned and coordinated for just this moment!

I gave Justin the cue by commenting that the lighting was absolute perfect and he turned to hold her hands. I have no idea what he said to Rachel at this point because I was too far away to hear, but I could tell that it was sweet and emotional because Rachel was crying. He then went down on one knee and pulled out the perfect gold ring with a brilliant cut round diamond in it.

And of course she said YES! Afterwards, I ran up to hug and congratulate them and to my surprise, I started crying too.

We decided there were a lot of other people in the park at this point and we wanted to go somewhere a little more private. When we got to our cars I pulled up a photo of the proposal to show them on my camera and Rachel burst into tears all over again and hugged me.

This is why I love being a photographer. I get to be a part of these private and precious moments and then I get to share the moment back with them in a way that girls dream of their whole lives.

At this point we headed to the Marie Gabrielle Cafe and Gardens to continue taking portraits because there were a lot of people showing up at Flippen Park. Here you can see the amazing wood signs that Justin made for the dogs to wear.