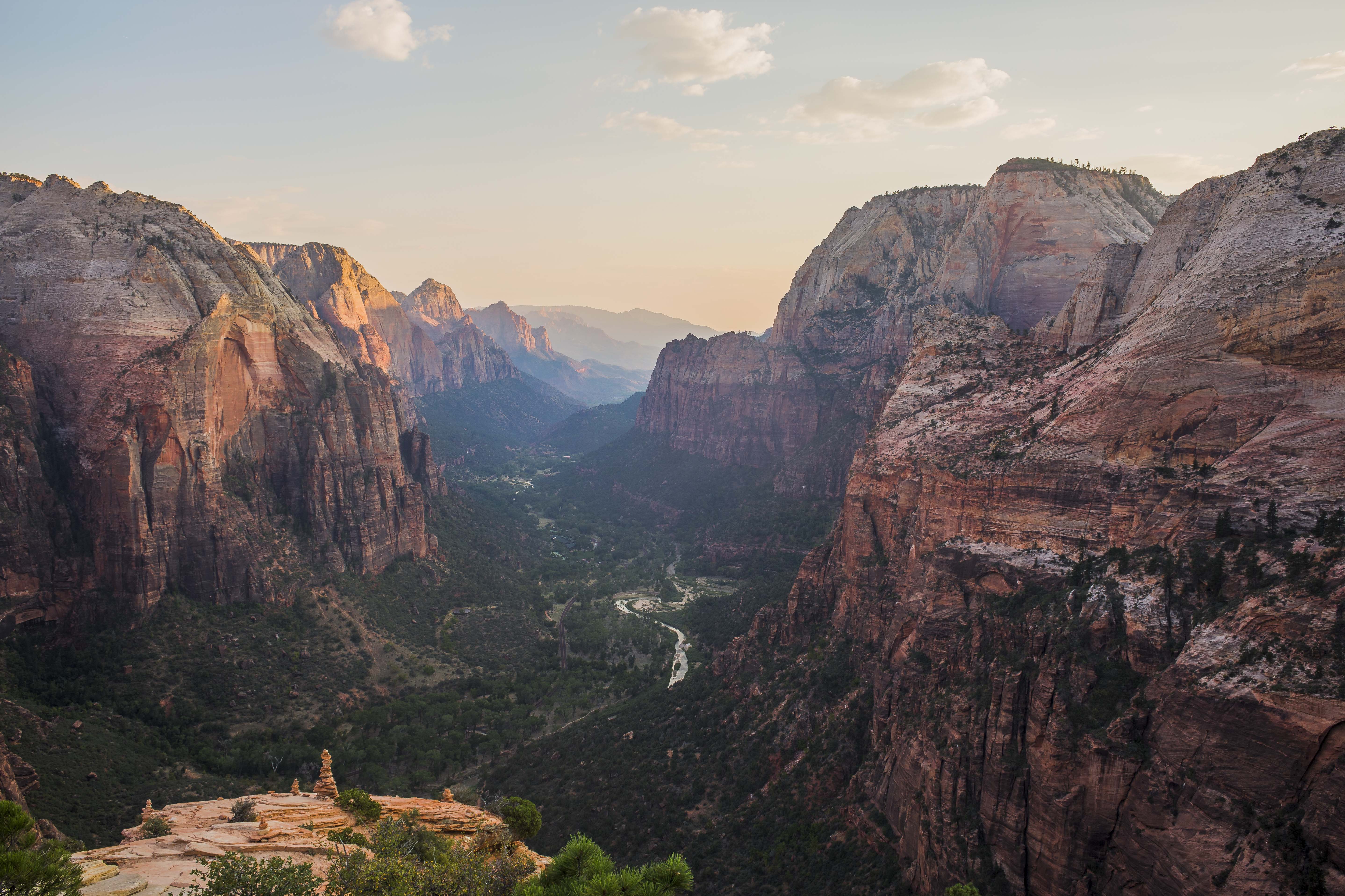 Zion National Park is truly one of the most beautiful places I have ever had the pleasure of experiencing. We flew into Las Vegas airport and made the hour and a half drive up to the national park. After a colorful and winding shuttle ride through the canyon walls, we found ourselves at the base of the Angels Landing trail head. Carrying my camera, lenses, and a large tripod, I fell behind my companions (yes, I know I need to re-evaluate my gear kit for hiking trips because my current setup is way to heavy). After a repetitive series of sharp switchbacks, we found ourselves entering a section known as “Refrigerator Canyon” due to the sudden temperature drop inside the close canyon walls. The steep trail evened out for a short while before continuing with more switchbacks and sharp turns. After what felt like forever, I saw the top of the trail.

But that wasn’t all. The next part was considered it’s own trail. Heavy metal chains were anchored into the sides of this giant and steep rock face. As we scrambled up the following the chains, I couldn’t believe how incredibly crowded the trail was. We went on a 3 day weekend and everyone else had the same plans to visit on this weekend apparently. Many of the other hikers were very dangerous trying to squeeze past clogged sections of the path and a few even made me lose my balance as they clumsily reached for the chains when they started to fall.

At the top of the mountain, we were greeted with the most beautiful and colorful sunset pouring through the canyon walls to bid us a goodnight. After several moments of enjoying the beautiful place and taking a few HDR images, we started making our way back down before the wind picked up and the sun disappeared completely. After a much easier descent, we caught the last shuttle of the night and made our way to the car so we could find a place to set up for the night. We camped just outside of the park in a desert area off of Eagle Crags Loop. No fees or facilities – just drive in and pick a spot to pop up your tent. 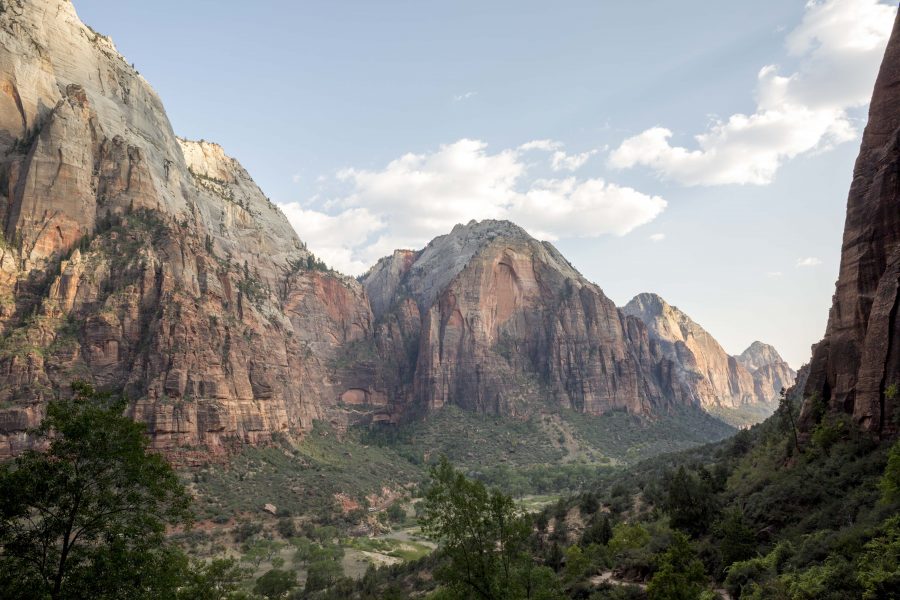 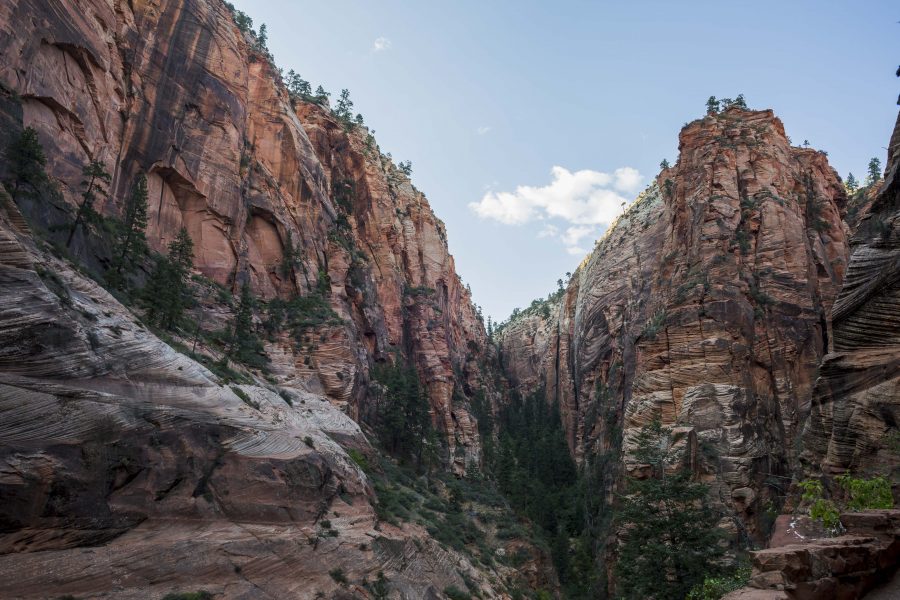 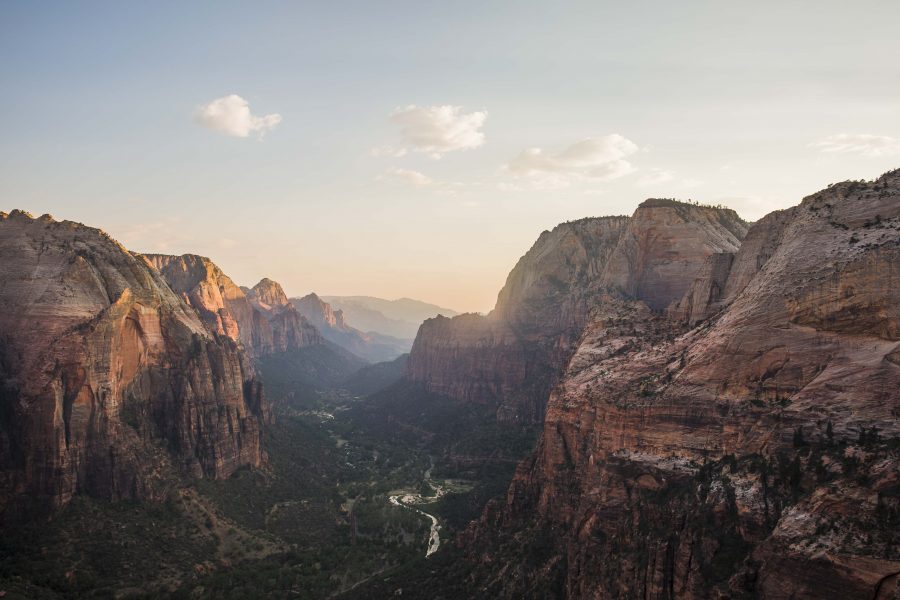 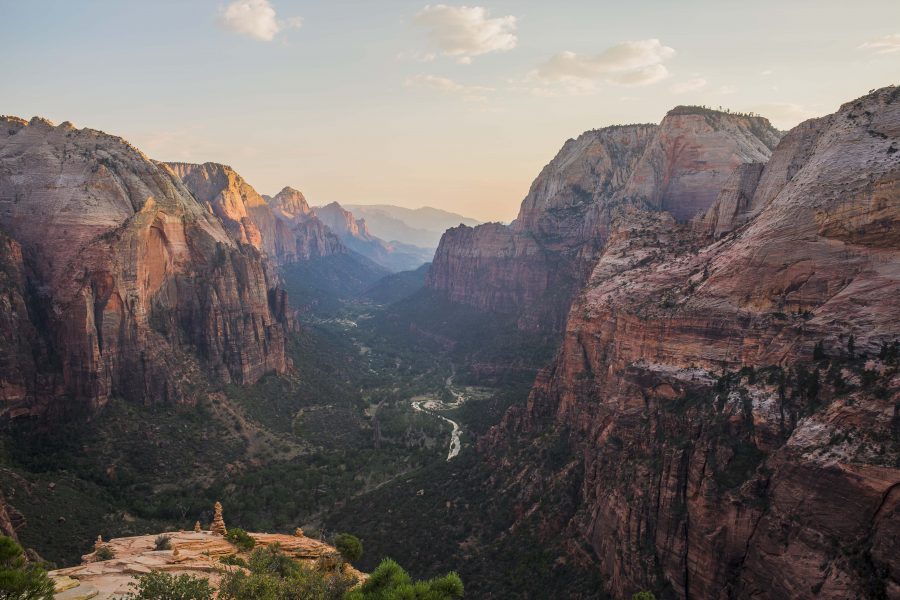 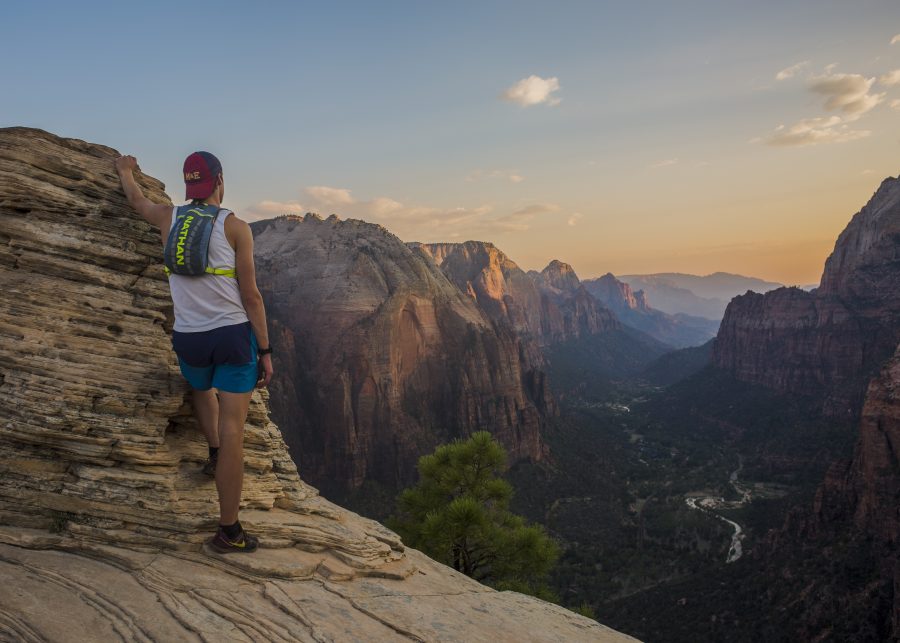 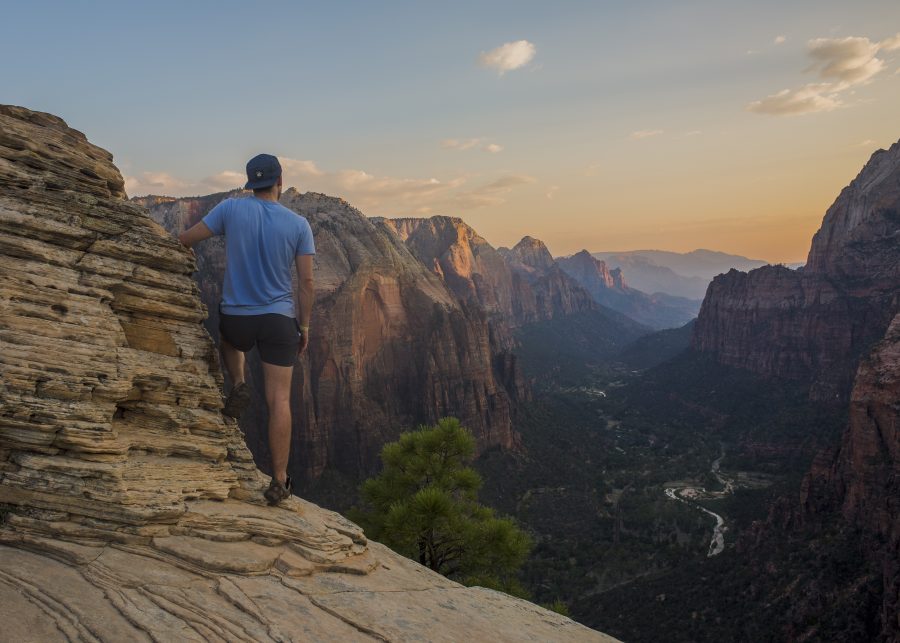 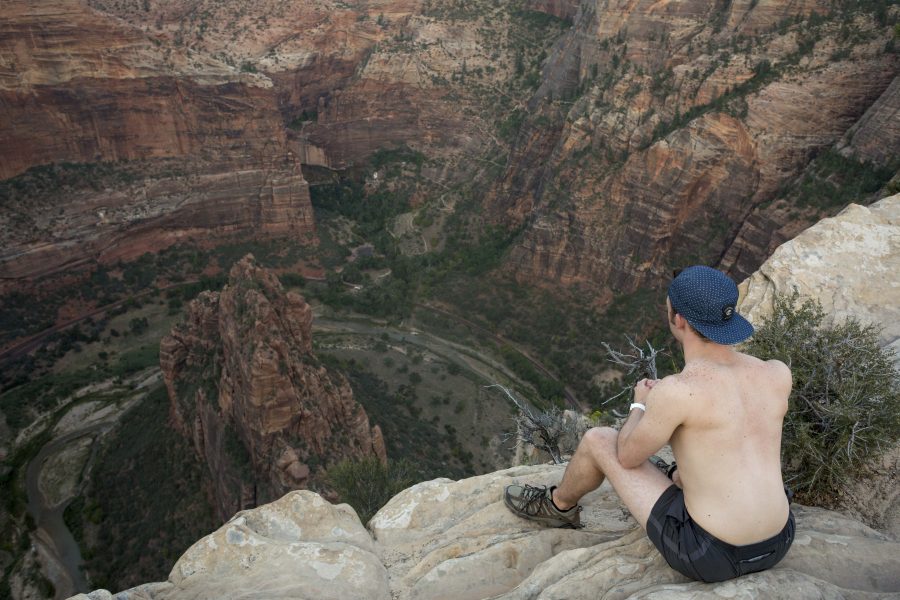 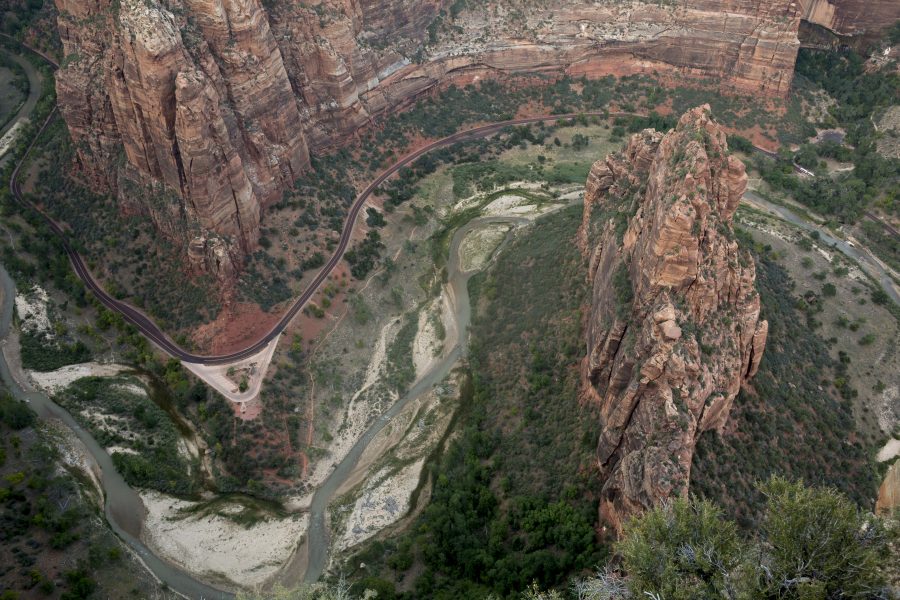 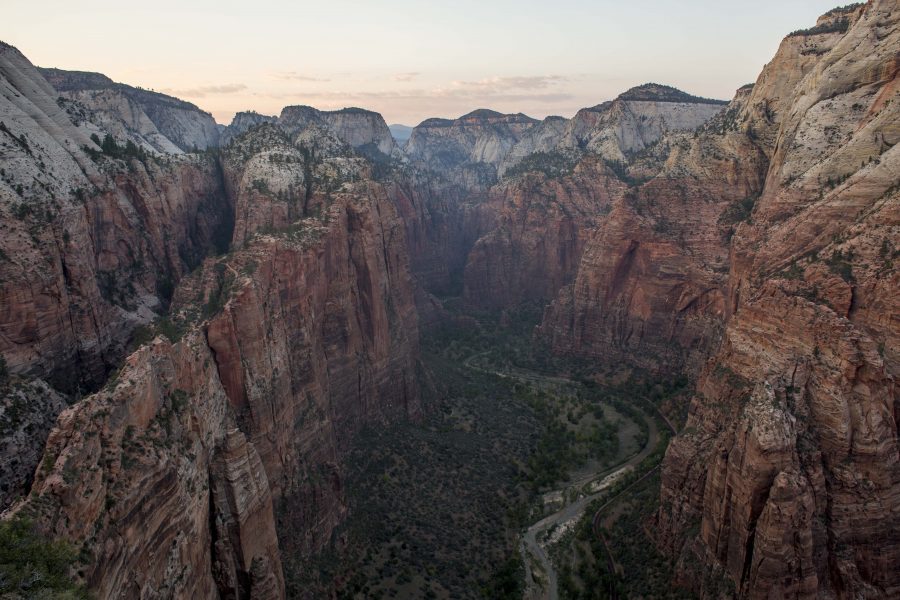 The next morning we got up early and took a shuttle to the Narrows – a colorful gorge with high walls and a river flowing through it. The earlier you can get there, the better it is. Most of the trek, the water was below our knees, but at a few points we were submerged to our waists and I had to be extremely careful with my gear to make sure I didn’t slip/fall into the water.

A couple words of advice for the Narrows – the earlier you get there, the better. Huge crowds form starting in the late morning and it is impossible to get good images without lots of people in them. Plus navigating around others when you’re trying not to fall is extremely difficult. Another point, be careful about the shoes you choose to wear. I took a pair of Chacos and they were great at first, but eventually I had lots of sores on the tops of my feet from sand getting into the straps and rubbing across the tops of my feet when maneuvering over rocks. One of my trip mates wore a pair of Tevas that didn’t give him any issues, but I think it depends on the design. 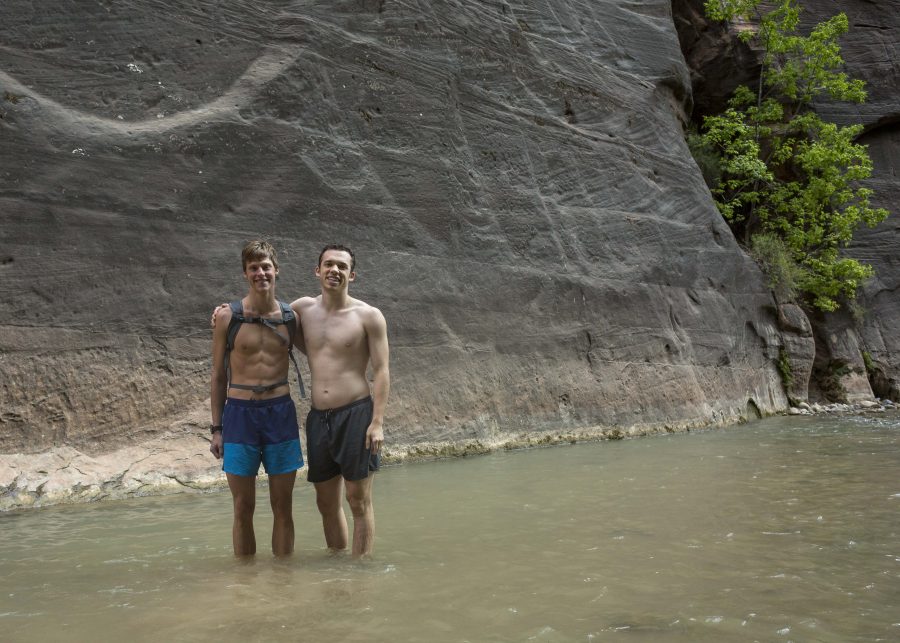 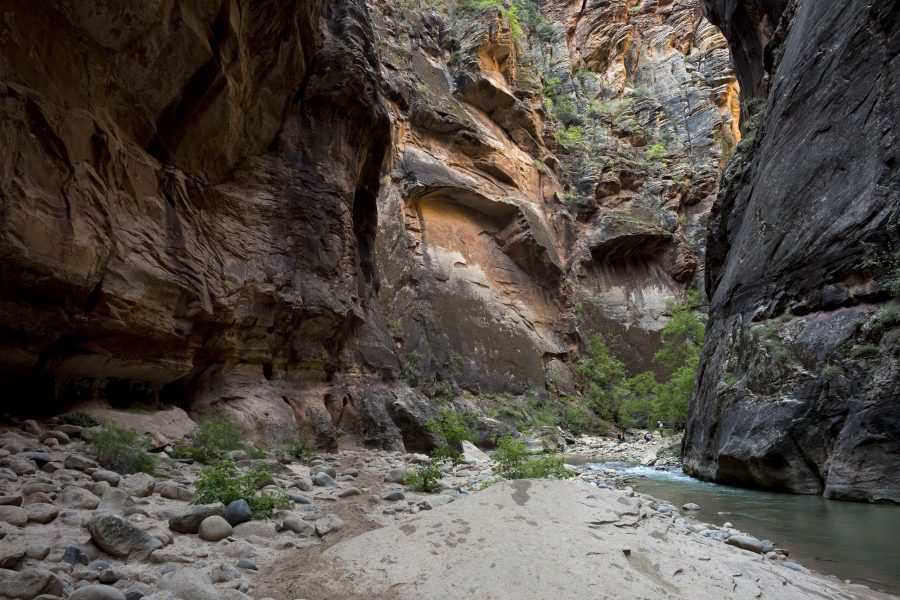 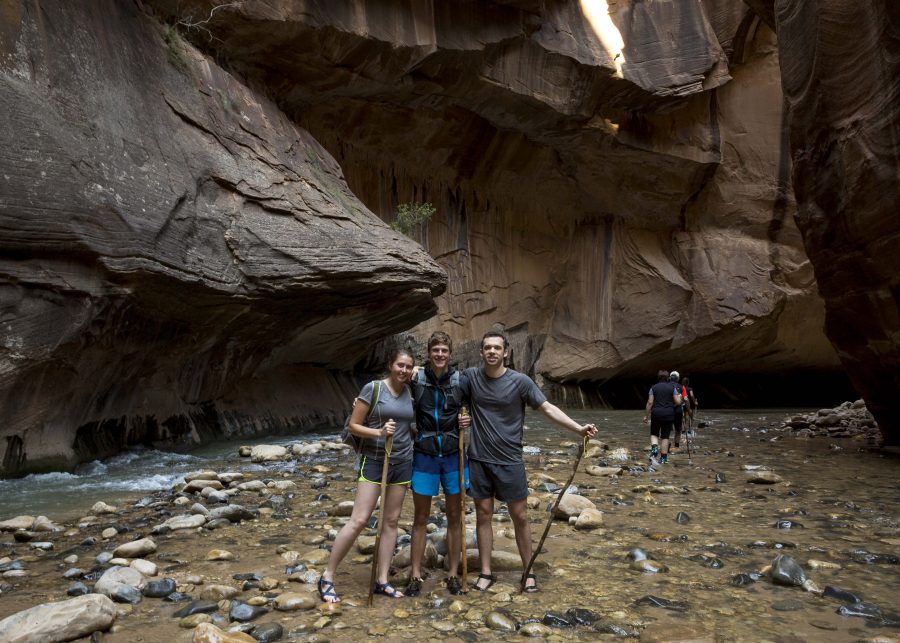 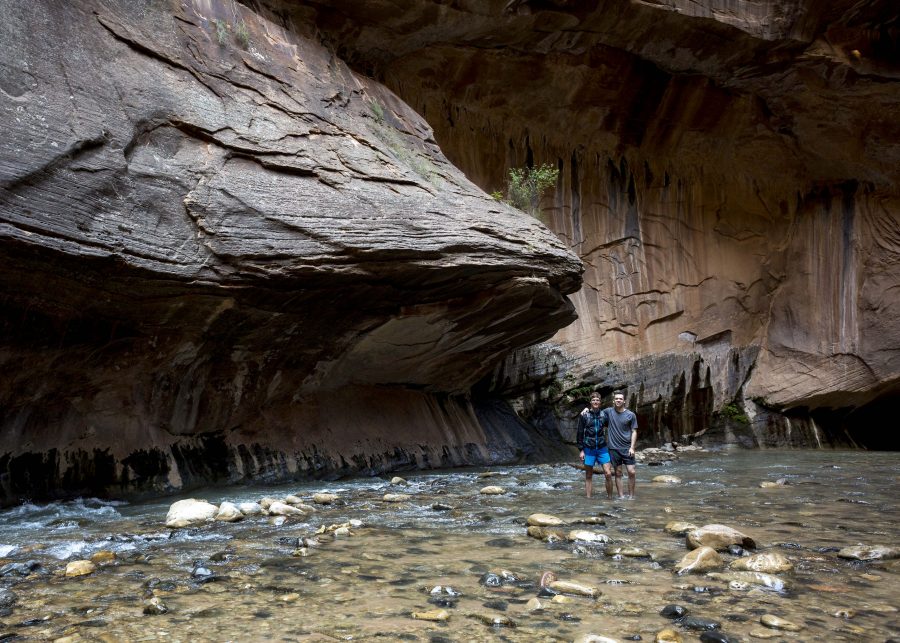 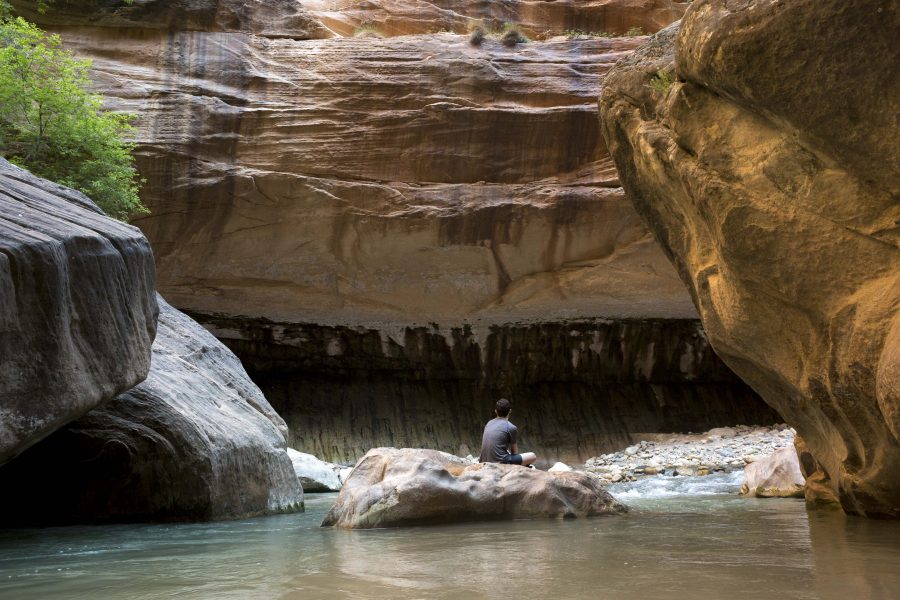 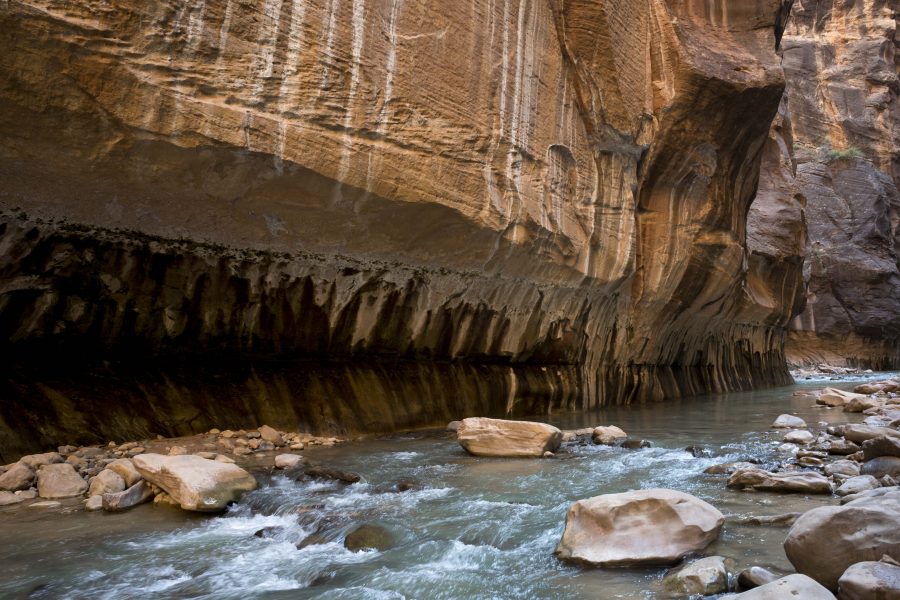 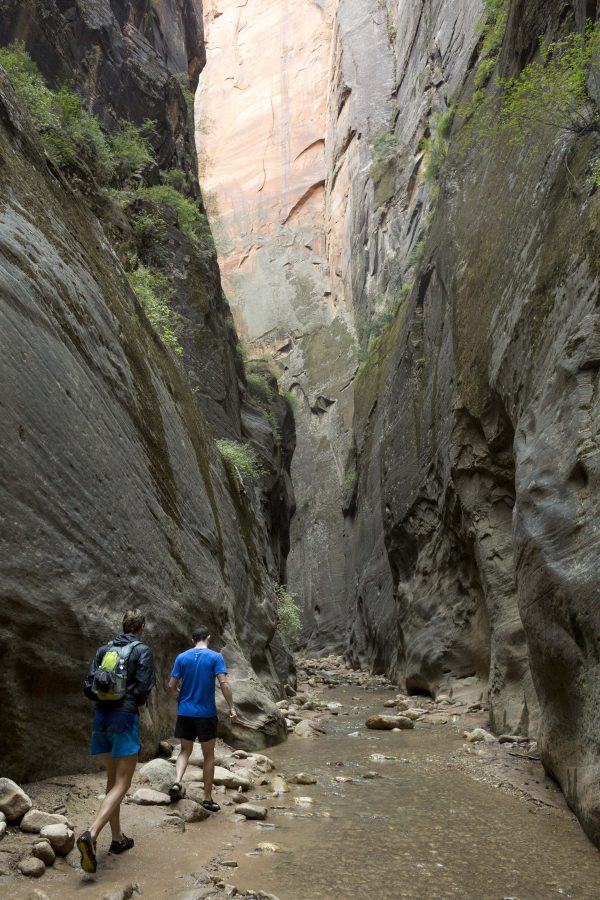 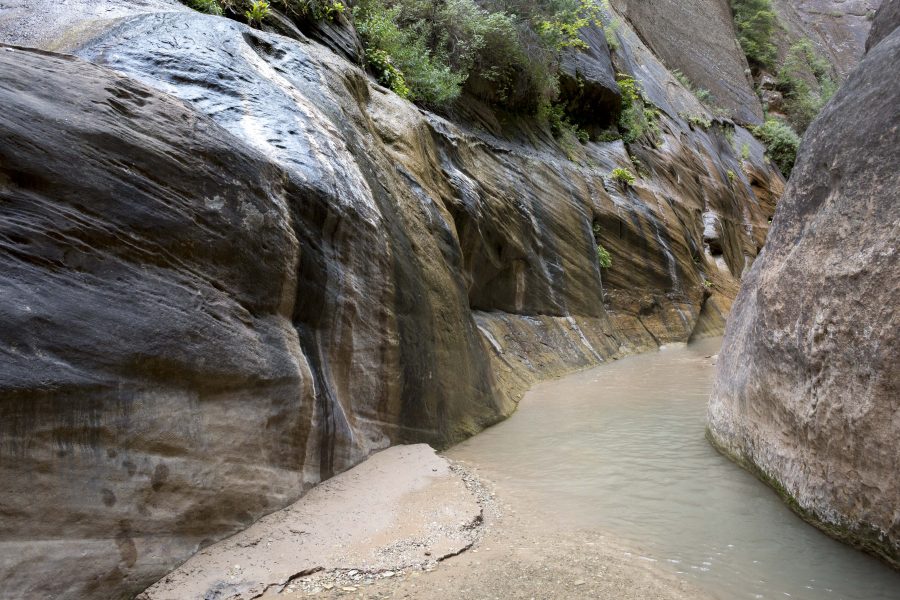 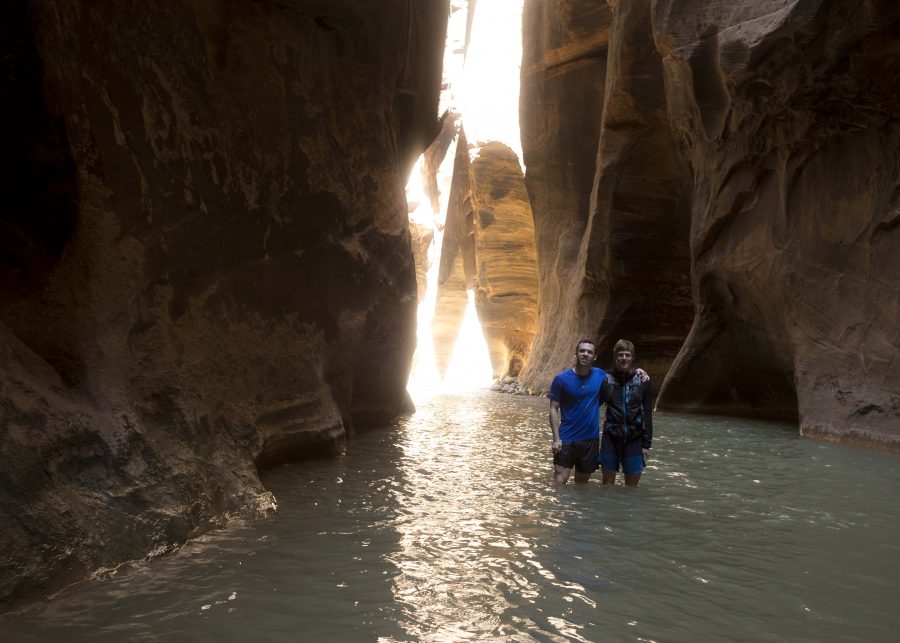 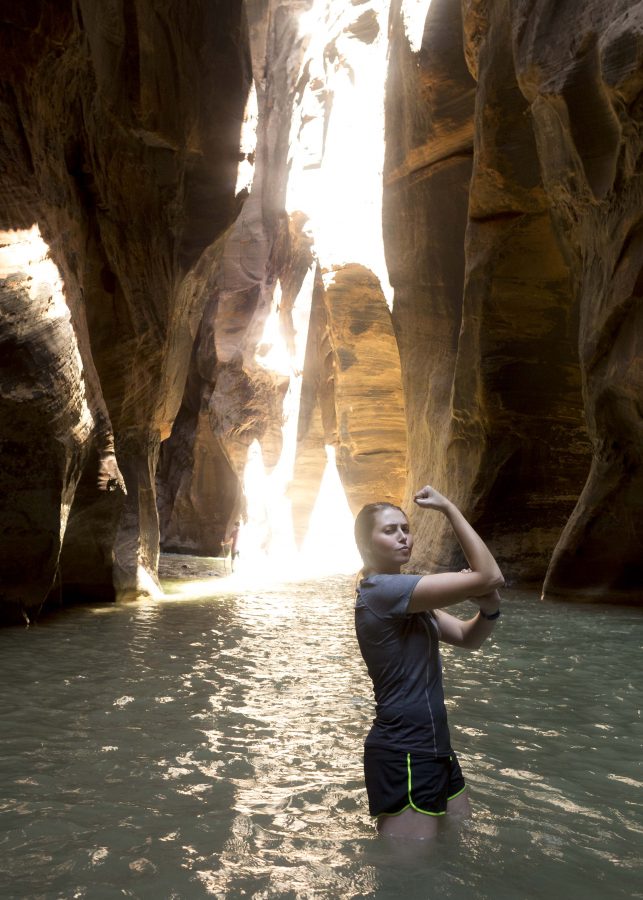 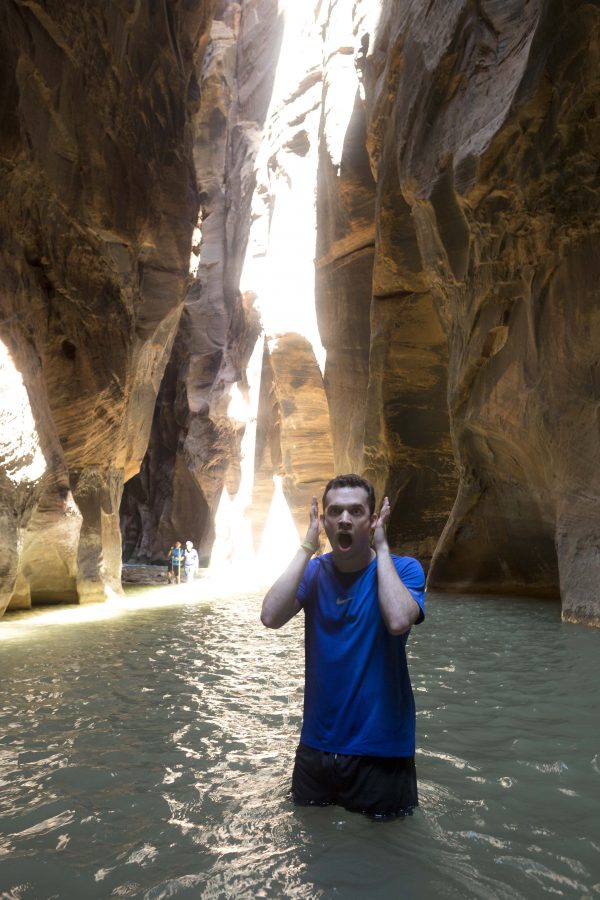